Scene from Apocalypse Eventually; A Comedy of Biblical Distortions....

“Hey, man....” Adam said slowly. “Do ya... think that like.... the Leviathan, was like Jesus's puppy? Yeah, man and then... like... one day He just yells out... Dad! The dog's chewin'... on the Jews again?” Adam asked with such shit-faced sincerity that Eve began making circles in the air with her finger just to screw with him.

“I'm weaving a spider web in your ear. Can you feel it?” Eve retorted.

“WHOA! Stop, man! Stop!” but Eve just wiggled her finger more. “I'm not touching you!” she teased. She was quite bored here. There was a perfect environmental balance that was miraculously kept in the garden. As such, there was very little entertainment other than popping out babies and picking cactus spines out of her husband's dong. As a result, she normally spent her days toying with her spouse's head, as he was usually drunk on forbidden fruit and reminding her how much he preferred Lilith's company.

Before she could really blow his mind, a faint glow appeared before them.

“Oh, fucking lovely,” she grumbled once she was certain it was not one of the unicorns calling its young.

“Eternal damnation. Aren't you glad you’re blitzed?” she said and added, “You ate the last fuckin' brownie didn't you? Asshole!”

“LIKE BEHOLD AND TOTALLY HARKEN!” the voice coming from within the light boomed.

“What?” Eve and Adam exclaimed in unison.

Before them stood an angel they'd never seen before. An angel.... with an obvious lack of education or taste. The latter was evidenced by the fact that his holy white robes had been replaced by a Hawaiian-patterned toga. He wore the thing short-sleeve, which revealed about thirty tattoos of skulls and assorted wild cats. His nose was pierced. He was wearing earrings, but they didn't match. Eve decided had it not been for the receding hairline, his hair would be down to his waist.

“Who the hell are you? Where's Gideon?” Eve snapped. She was having serious doubts about this holy messenger casting her into the pit. He looked like the creepy old guy in the back of the club that will try anything to hold onto his glory days. Why should he have any power over her soul when he obviously didn't know how to dress himself?

“Like whoa, man. Like Gideon had a gig in a jazz club, but he wouldn't have come anyways. He was transferred to legal, like two centuries ago! I'm his replacement, Star Child,” the glowing idiot said.

“Oh, a family name? Somehow you don't strike me as particularly holy! You're barely even glowing!” Eve snapped. Adam fell on his face out of respect, and then let out a light snore.

“Oh yeah, we only use the energy efficient bulbs now. Desperate times man, desperate measures. Yeah stellar, man! Check it out, I got lucky with this gig! I got hired after they passed the Paper Reduction Act. Most of the Holys then didn't know jack about Java!” he yelped.

“You don't say,” Eve grumbled, as she stepped side ways to kick and rouse her idiot... or spouse... or vegetation humper... or whatever.

“Straight up! Look, I gotta be super-quick. I got another gig after this one,” quipped Star Child.

“Oh... let me guess? You have to condemn us really quick because you're late for your job as a cheesy lounge singer at the Recently Widowed Convention?” Eve gasped. She was really getting irritated with this middle-aged jackass.

“Oh, no, man. Nothin' like that, dude. The Big Guy really got chillaxed after His kid was born. Totally forgave everybody. Too cool man. Now people only have to pay dues on serious shit! Like... letting Lilith outta the garden.”

“What?” Eve remembered the hairpin. “That hairy bitch!”

Adam now standing, or a better word might be wobbling, piped up, “Whoa... cool ink. I bet you get a lot of cactus, huh?”

“Never mind him. If we get her back are we excused?” Eve asked.

“Abso-freakin-lutely. Only one serious downer, out there... she can look like anyone. So um... here's the key. Lock her up tight,” said Star-Child.

“Wait!” Eve barked and pushed her husband over with her pinkie finger. “If she looks like anyone, how will we know it's her?”

“Well, she'll still smell the same. Like, y'know, she can appear to look like a human, but she still has to behave like a monkey, right?” Star Child pointed out.

“So, what are we supposed to do? Just walk around sniffing people?” Eve yelped.

“I can totally do that man,” Adam moaned.

“WAIT! If He forgave everyone, why does time have to end?” Eve asked.

“Man's lost it. Too many politicians and not enough philosophers. Man's got too much time on his hands, yet he fills it with crap. People got time for reality shows but not for creating a better reality. You try finding good in the world, dude. I been here over a decade... I ain't seen none.”

“Well, what difference does any of that make if we're all forgiven?” Eve asked.

“Ah, dude, you got it wrong. He still loves man. But man loving Him? They forgot how. It's a gentle wake-up call.”


“Snap! I'd like to help you two dudes, but I'm late now. Bill Gates is dying, and I gotta take him to hell for Windows 10!” Star Child remarked, and the glow disintegrated.*** 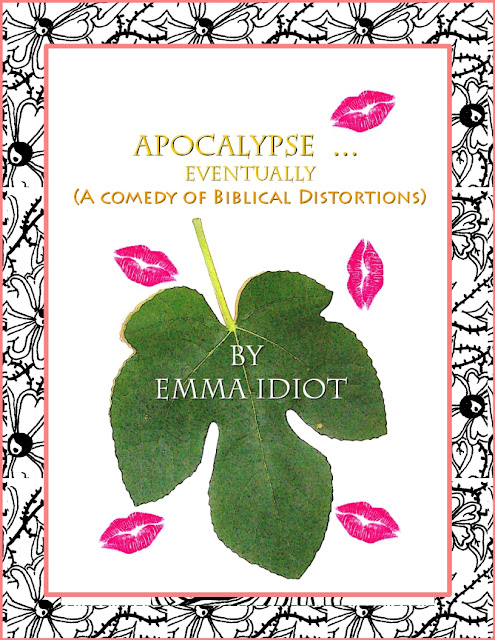 Posted by Cheshire Grin Publishing at 10:50 AM